All wood flooring with under floor heating. Please note the underfloor heating is on 24hrs a day (Room thermostats should not be tampered with).

Garden suitable for all ages including disabled access.  Opportunity for gardening open to all ages & abilities.  Outside seating and BBQ’s available. 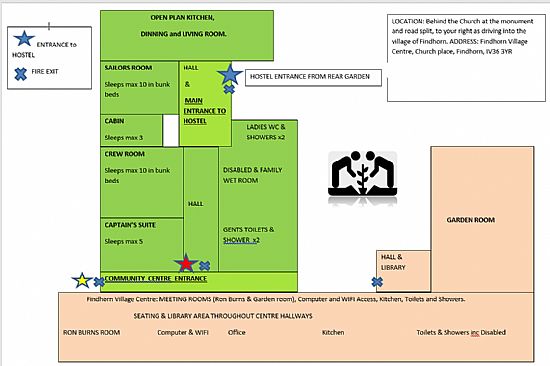 Playback Theatre are coming to the Findhorn Village Centre

Findhorn Playback Theatre Companycame into being to serve the Forgiveness Conference at the Findhorn Foundation (a spiritual and intentional community in the North East of Scotland) in October 1999 and from then began to perform at conferences and community events, both lovallyand across Scotland.   These have included ‘Out of the Ashes’ in Edinburgh in 2002; six sessions with the local YMCA in Elgin; birthday parties; people’s leavings of their communities and schools; performances for people with learning disabilities and conferences at the Findhorn Foundation including The Soul of Education, Sex and Spirit and more recently the Northern Lights schools and community education conferences.
There are currently eight of us, four of whom are founder members.  We are 6 actors, a conductor and a musician.

Playback Theatre is a global network of theatre companies, with an emphasis on community and service. It is part of the improvisation drama/storytelling shamanic, ritual theatre tradition; we make theatre from the audience’s stories as catharsis, release and entertainment and as a way of honouring and sharing our common humanity.

Our company is a member of IPTN (International Playback Theatre Network).  Individual members of our company have ‘played’ and trained with other companies from London, Italy, Israel, New Zealand, South Africa and Ireland to name a few. We are one of over 100 playback companies in 50 countries, which started with the birth of Playback Theatre in 1975 in America by Jonathan Fox and Jo Salas who are still both teaching and performing.(www.playbacktheatre.org and UK www.playbacktheatre.co.uk)


How does it work? Playback Theatre is spontaneous - it is theatre created through a unique collaboration between performers and audience. Someone tells a story or moment from their life, chooses actors to play the different roles then watches as their story is immediately recreated and given artistic shape and coherence.